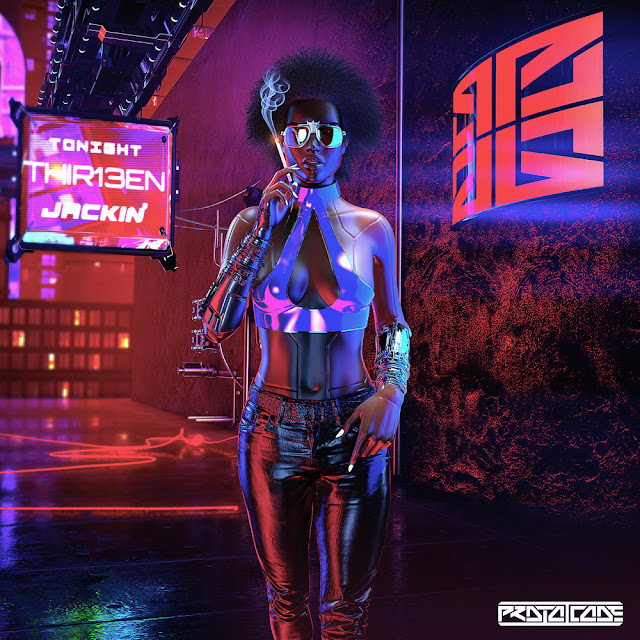 Once again proving their industry-leading ability to scout for exceptional artists at the formative stages of their careers, prominent Perth label ProtoCode have welcomed Moscow newcomer Thir13en to their ranks with the release of the guttural two-tracker “Jackin’” / “19 By 6”. Listening to the elusive Russian drum and bass producer’s latest offerings, you’d never expect him to be new to the scene; his crisp mixdowns and bold sound design make for one of the label’s most exciting drops to date.

From its outset, “Jackin’” lulls the listener into a false sense of security with its warm introductory pads and plucky, throbbing basslines, its pop-tinged vocal samples implying that the ensuing crescendo will take the form of a euphoric liquid roller. Instead, the track breaks out in jerking drops punctuated by gravelly basslines, flitting synth stabs and careening mechanical buzzes, offering a thrilling contrast from its breezy introductory passages.

Next, the intricate stepper “19 By 6” greets the listener with muted arpeggios and suspenseful synthetic groans, soon working its way up to an intoxicating climax. Foregrounding the clattering, percussive basslines and furnishing the track with plinking harmonies and exuberant drumrolls, Thir13en is really able to flex his expert craftsmanship, packing every second of the song with meticulous synth work and detailed drum programming to ensure that the track remains unpredictable up until its final moments.

While the name will undoubtedly be new to many, these two tracks should do more than enough to cement Thir13en’s reputation as one of the drum and bass scene’s brightest new talents. Meanwhile, ProtoCode continue to prove themselves as a truly international outfit, breaking new talent from across the globe all while operating out of Australia’s West Coast. Having recently celebrated their second anniversary, who’s telling what the third year for this increasingly prolific label will hold…

Cover Artwork jpg
Posted by Bella Bass Fly at 4:37 AM