Posted by Bella Bass Fly at 1:33 PM No comments:

Dancing from the heart is a luxury most ignore. To express freely from the soul through the physical is true divinity but most are too caught up in what others think to try. I love watching the soul release onto the floor. No stigma just raw physical freedom.
BellaBassFly
• Buy/Stream: https://anjunadeep.ffm.to/fwwnmep • Follow Anjunadeep New Releases: https://anjunadeep.ffm.to/newreleases... • Listen to the Anjunadeep Discography: https://anjunadeep.ffm.to/discog.oyd • Listen to Anjunadeep Radio 24/7: https://anjunadeep.ffm.to/radio • Join our newsletter for updates: https://anjunadeep.com/signup One of the UK’s biggest breakout dance acts of the past few years, Franky Wah made his Anjunadeep debut earlier this year with ‘Should Have Seen It Coming’, feat. AETHO. The Yorkshireman’s label debut racked up over 30 BBC Radio 1 plays, including a Hottest record accolade from Annie Mac, SiriusXM playlist support, and over 4 million streams in the past 8 months. In 2021 alone, he’s released a string of chart-topping originals, collaborating with some of the biggest names in dance music including Carl Cox, Lee Foss, Cristoph, and Sasha. Franky Wah now returns with ‘Why Not Me’, his second EP on Anjunadeep, which includes the lead single ‘Bring Me Back To You‘, featuring English singer-songwriter iiola. Supported by BBC Introducing and Complex for her solo material, iiola has made a name for herself in recent years, collaborating with Sub Focus and Wilkinson on their UK Dance #1 album ‘Portals’ and supporting acts such as Nina Nesbitt and Saint Raymond. ‘Bring Me Back To You‘ has already received support from Danny Howard and Sarah Story on BBC Radio 1. "'Bring Me Back To You' really felt like the perfect follow up to 'Should Have Seen It Coming', lyrically, sentimentally, and also because of the message it stands for. iiola and I had been working on a few different records together but she felt like the perfect addition to this track and Anjuna also stood out as the perfect home. I know iiola actually pulled her car over to Shazam ‘Should Have Seen It Coming’ when she first heard it on BBC Radio 1 so it really feels like it’s all come full circle for the both of us," Franky says. Release date: 24th November 2021 Follow Anjunadeep: • Youtube: http://Anjunadeep.lnk.to/DeepSubcc • Website: http://www.anjunadeep.com • Facebook: http://www.facebook.com/anjunadeep • Twitter: http://www.twitter.com/anjunadeep • Spotify: https://Anjunadeep.lnk.to/NewReleases... • Instagram: http://www.instagram.com/anjunadeep • SoundCloud: http://soundcloud.com/anjunadeep • Reddit: https://reddit.com/r/AboveandBeyond/ • Twitch: https://www.twitch.tv/anjuna • Discord: http://www.discord.gg/anjuna • Join our newsletter: https://anjunadeep.com/signup/ #Anjunadeep
Posted by Bella Bass Fly at 1:26 PM No comments:

I have blogged Wilkinson since the very beginning…. That said, there are not many artists that continually create content that is perpetually superb. Watching the evolution of an artist is the highlight of running a publication. Wishing greatness for all. Wilkinsons body of work speaks for itself. I hope you enjoy this new vocal visual from Drum & Bass juggernaut, Wilkinson.

Posted by Bella Bass Fly at 6:22 AM No comments: 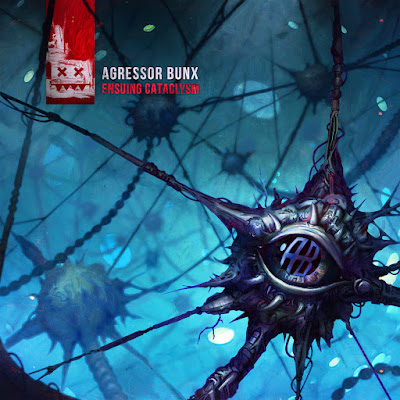 >Stream Agressor Bunx - Airflow (Eatbrain LP012) by EATBRAIN | Listen online for free on SoundCloud
>Stream Agressor Bunx - Deadline (Eatbrain LP012) by EATBRAIN | Listen online for free on SoundCloud
>Stream Agressor Bunx - Deadline (Eatbrain LP012) by EATBRAIN | Listen online for free on SoundCloud
It began with a low rumble from all degrees of the horizon, and envelopment of portentous sound that seemed to emanate from everywhere and nowhere all at once. From high above, fluctuations in the jetstream whipped the clouds into a frenzy, stretching, swirling, and blending them into a slate of blackest-grey from within which thunder and lightning began to add their voices to the ensuing cacophony. As the roar on the horizon grew, the very air itself seemed to slip and surge around the sonics that cut through it, churning it from stillness into a great gale that nipped with icy jaws at the flesh of any caught within its flow. Then, as though in a perfectly discordant concert with the air above, the ground itself began to shake, roiling in opposite motion as the second wheel of a planetary mill set to grind those upon the surface into dust. From within the fissures that scarred the Earth’s surface poured rivers of magma that made a cruel mockery of the world’s aqueous veins as they brought death to all with which they intersected and poisoned the air with toxic gasses long kept locked beneath the earth. Those who strove yet to live within this hellish world could not but hear a single voice in their minds, chiding them for forgetting what had always been known, dooming them to watch as the ENSUING CATACLYSM consumed the world that had once been their home.AGRESSOR BUNX stand before the EATBRAIN horde as the heralds of the ENSUING CATACLYSM as they deliver their first full album to the waiting ears of the label’s faithful. The 18-track span of ENSUING CATACLYSM features the full breadth of the Ukrainian duo’s unrelenting approach to drum & bass as they meld key aspects of its many subgenres to imbue their album with apocalyptic audio energy set to inspire fanatical chaos in even their most seasoned of listeners.
Posted by Bella Bass Fly at 6:18 AM No comments:

[Unsocial]’ is the brand-new LP dropping from drum & bass producer Audio, a name which sent shockwaves across the community when it was announced he’d signed to influential imprint RAM Records. But his fifth album ‘[Unsocial]’ goes further than the sounds he’s cultivated over decades and instead sees him dig even deeper into what is at his core as an artist. After feeling a certain amount of pressure which came through writing big tracks of a certain style, the ongoing pandemic has helped him elevate himself out of the pigeonhole he’d found himself in whilst keeping him planted at his roots. With the world going into lockdown, he felt a pressure release, not being so reliant on music financially, especially the type of music he’d written to get the best reactions whilst playing out. But after the DJing disappeared, it became more about what he wanted to focus on artistically. It wasn’t until he was out of the other side, producing back at home and away from dancefloors he came to realise the love had been squeezed out of his work. Something which returned with the creation of his forthcoming LP ‘[Unsocial]’.

Covid provided Audio with a reset as survival mode kicked in and he started to dismantle the stereotype of his artist name. An unforeseen consequence of world’s changing face saw him fall in love with drum & bass again, washing away the complacency and leaving him no longer feeling boxed in by his position. Now there was no question about whether exploring a more expansive path would affect bookings, and he certainly didn’t want to repeatedly produce another ‘Headroom’, but still wanted to continue the hard style he was renowned for. The voice he thought he’d forgotten he now found with ‘[Unsocial]’ and it felt like a similar homecoming to the conception of his legendary album on Virus Recordings, ‘Genesis Device’.
Meanwhile, ‘Yellow Was the Light’ and ‘Fool’s Paradise’ represented the embracing of new freedom, which was invigorating for Audio’s journey throughout the making of ‘[Unsocial]’. Both selections stand as a celebration, one which saw him jump back into the same timeline as his family, it flipped the situation in his mind. It was as if previously he’d been in lockdown, unable to reach the inspiration which family life now offered him.  With more music still to be uncovered, ‘[Unsocial]’ is the fruits of Audio’s labour after two years in the pandemic world. It takes its listener on a journey through everything he loves about drum & bass. It’s homegrown, personal, and organic, even down to Audio generating its artwork; the LP came out of no necessity and under no contracts, instead one track led into the next until it was finalised. All coming from the same place and creating an album in the fullest sense. A listening experience and a voyage, ‘[Unsocial]’ is the next stage in Audio’s progression - finding a home once more in the catalogue of RAM Records, nearly thirty years in the game.

Posted by Bella Bass Fly at 5:05 AM No comments:

🔈 Purchase/Download : https://bit.ly/3k9EQQw ➕ Subscribe for more videos : http://bit.ly/2hfVyLU​​ "Say Less, Love More" is the third album from hip hop duo Gavlyn & DJ Hoppa. "This album means a lot to me because it's the most healing record I've ever written. People forget how powerful words can be, especially when said out loud. This has affected me as a lyricist, so I've been making it a point to have my words build the house I live in. The motivation is growth in all ways. Another classic with by bro DJ Hoppa." -Gavlyn Artist: Gavlyn & DJ Hoppa Title: Audrey May Label: Broken Complex Mixing/Mastering: @xanthemannn 💿 Buy Gavlyn & DJ Hoppa Music & Merch: http://brokencomplex.com/shop​​ 🌎 Website: http://www.brokencomplex.com​​ Instagram: @gavlynnn @djhoppa @brokencomplex http://www.brokencomplex.com​​ #brokencomplex #gavlyn #djhoppa
Posted by Bella Bass Fly at 11:31 AM No comments:

People who have been through a tremendous amount in life will often say "This saved my life"  That  statement is the absolute truth. When I hear someone speak those words I know they overcame something massive. Entitled people will never understand those words. Empathy derives from trying to understand peoples struggles. More now than ever narcists try to convey & convince people of empathy when in reality they have zero concept of the word. Inspiration and hope are born in the dark. Unfortunately only those willing to do shadow work and those committed to true understanding understand empathy. Jumping in an ambulance with a stranger who has been hurt so they are not alone is empathy.  Being in discomfort to truly understand a situation is empathy. It is not some catch fraise.  "This saved my life!" is a declaration of survival..... I'm here for it. I love providing a platform for it and I won't be stopping anytime soon. Thank you for your continued support here @ www.bellabassfly.com Sharing peoples art is my passion. Celebrating their victories and their voice is all inspiring. Spreading love.
BellaBassFly
Posted by Bella Bass Fly at 11:23 AM No comments: