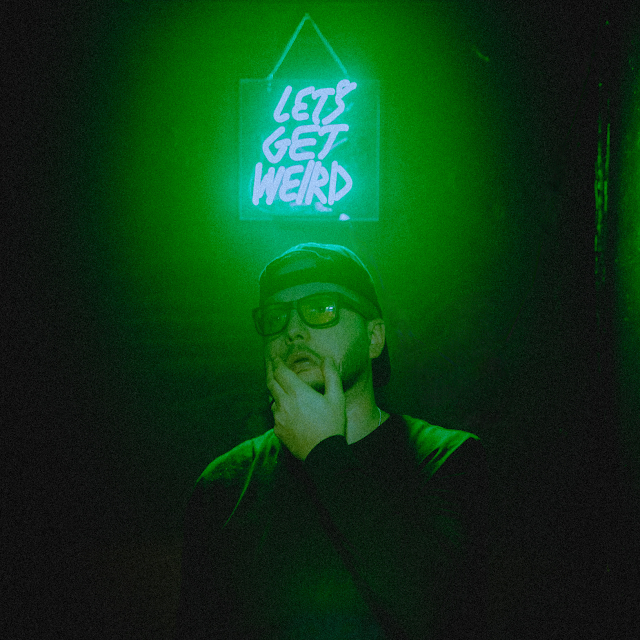 Weird times call for weird music: Caspa blazes through the mists of unprecedented misinformation and division with his biggest brace of cold hard 140BPM truths in years. Introducing ‘Let’s Get Weird’... And all big things set to follow in its wake. Six tracks wide and landing just in time for his Secret Stream With Caspa launch on October 31, ‘Let’s Get Weird’ is the debut release on his brand new label Ghost Town, and it marks the start of a whole new chapter for the bass pioneer.

Still keeping it dubstep, still keeping it authentic, still swiping you off your feet with his off-the-wall bass designs and tense, stripped-back dynamics, but now giving even less of a f**k about industry formalities or expectations, Caspa has always stuck to his guns... But right now those shooters have been upgraded to straight-up missile launchers.

As always with our intrepid sub soldier, the music fires the strongest shots right from the bottom of the trenches. Opener ‘From The Gods’ says it all as heaven-sent choral voice stabs twist and in and out of a signature alien bass squelch. Setting the scene, it’s backed up to the nines by more lean, mean missives: ‘What The Brass’ brings a little symphonic drama to the mix, all the while maintaining that fat smoky swagger he’s become known for, ‘Sedated’ takes us even deeper into our friendly ghost’s psyche with its woozy sense of unreality while ‘Lost In LA’ takes us around the murky corners of La La Land that most tour guides would be too scared to tread. Deeper into Caspa’s first release of 2020 we strike soul gold on the penultimate track ‘Blame You’. One of his most emotional cuts since ‘Victoria’s Secret’ on his debut album in 2009, it’s all about those soothing chords and shimmering sounds before we’re shut down by the weighty finale ‘Don’t Know When To Stop’. Dark, twisted and weird to the core, Caspa ain’t stopping.... And neither are you. It’s going to take a lot more than the current situation to shut us down. Keep your head up. Keep yourself and your loved ones safe and sane and always, always, ALWAYS keep things weird. Expect plenty more weirdness where this came from... And expect it very soon.